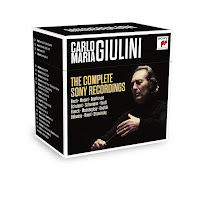 Sony Classical celebrates the 100th birthday of the Italian conductor Carlo Maria Giulini (May 9, 1914 – June 14, 2005) with a 22 CD Box Set.
“Impeccably played by the BPO, the precision and polish of ensemble, the exactness of intonation, and the transparency and delicacy of texture are a delight from beginning to end.” The American Record Guide’s verdict on Carlo Maria Giulini’s 1991 coupling of Mozart’s last two symphonies (Nos. 40 & 41) is a summary of musical virtues that could apply equally well to virtually any recording by the revered Italian maestro, whose centenary in 2014 is being marked by Sony Classical with the release of a celebratory 22-CD boxed set.
Reporting his death in June 2005, the New York Times lamented the passing of “an idealistic maestro acclaimed for his refined and insightful accounts of the standard orchestral repertory”, “a deeply spiritual musician … who achieved results by projecting serene authority and providing a model of selfless devotion to the score”; while The Daily Telegraph paid tribute to “a tall man with saturnine good looks and the deportment of a Roman aristocrat” who “made no flamboyant gestures to win the adulation of audiences, but was such a charismatic presence on the rostrum that his popularity was immense.”
A former orchestral violist, Giulini was always a player’s conductor; neither a showman nor a martinet, more of a high priest or philosopher of the podium, completely and utterly dedicated to serving the composer and not his own ego. Yet, despite his modest, self-effacing manner and avoidance of platform histrionics, Giulini’s conducting career had begun in the most dramatic circumstances. An ardent anti-Fascist, he had gone into hiding to avoid conscription into the Italian army, only to re-emerge after the Allied liberation of Rome in June 1944 and make his conducting debut with an all-Brahms concert to celebrate the occasion.
Soon widely recognised as the leading Italian conductor of his generation, Giulini went on to enjoy a dazzling international career in both the opera house and the concert hall, holding principal positions with such prestigious organisations as La Scala, Milan (where he famously collaborated with Maria Callas and the stage directors Franco Zeffirelli and Luchino Visconti), the Chicago and Vienna Symphony Orchestras and the Los Angeles Philharmonic.
In the 1990s, when Giulini’s artistry was at its most refined but his live appearances had become increasingly rare, the benchmark Sony Classical recordings of masterworks by Bach, Mozart, Beethoven and others perfectly encapsulate and celebrate the artistry of the great maestro Giulini. Set Contents: DISC 1
Posted by bayreuth at 12:57 AM