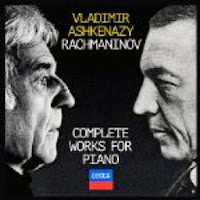 Ashkenazy s Rachmaninov recordings whether of the concertos or the mature solo piano works have long led the field with their balance of contained muscularity and lyrical insight. --The Daily Telegraph. London

There is superb flair and panache about Ashkenazy s playing and his poetic feeling is second to none. --The Penguin Guide on 24 Preludes

The Piano Concertos and Rhapsody on a Theme of Paganini are here in versions with the Royal Concertgebouw Orchestra under Bernard Haitink: The combined virtues of soloists, conductor, orchestras and recording on the new Decca are really rather remarkable. --Gramophone on Piano Concerto No. 1

Vladimir Ashkenazy is the pre-eminent interpreter of Rachmaninov s music, having championed it since the outset of his career. Ashkenazy is the only musician to record all of the composer s piano works. This collection includes all Rachmaninov s piano music, from his earliest compositions to the final masterpieces.

While the vast majority of the recording in this set are of digital-era provenance, the 11th CD includes earlier (analogue) versions of works included elsewhere in the set, including Ashkenazy s earlier thoughts on the Corelli Variations and the Etudes-Tableaux, Op. 39.

This is the first of a number of really compelling Rachmaninov products in 2014: it may not be an anniversary but 2014 is hugely significant, as this major 20th-century figure died in 1943, over 70 years ago. That means most markets no longer pay mechanicals on this ever-popular composer.

CD 6
Variations on a Theme of Chopin
Piano Sonata No.1 in D minor, Op.28