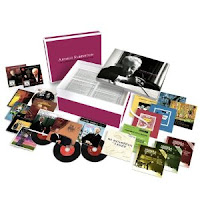 Post on request.All credits goes to the original ripper xbrg.

From December on, "Arthur Rubinstein The Complete Album Collection" will be the world's biggest CD edition for a solo artist according to Guinness World Records (TM). It features all the legendary pianist's issued recordings made by RCA Victor between 1940 and 1976, and includes one LP issued on the DECCA label in 1978. The collection also includes the recordings Rubinstein made in England for the English label His Master's Voice (HMV) between 1928 and 1940, most of which were released in the United States by RCA on its Victor label. The collection includes complete studio and live performances, solo, concerto and chamber music repertoire in reproductions of original LP sleeves and labels, the earlier recordings, initially released on 78-rpm discs, appear in three sets with 14 CDs in the edition.

The bonus CDs in this edition (CDs 140-142) contain recordings of his legendary 1961 cycle of ten concerts at New York's Carnegie Hall. They include four works that Rubinstein had never before committed to disc plus two others that represent brand-new additions to his RCA discography.

This edition also boasts the finest sound quality ever bestowed on Arthur Rubinstein's complete recordings. The masters for the principal works in the collection come from the series of Living Stereo SACDs and Japanese XRCDs. All the other recordings are based on masters from the Rubinstein Collection of 1999, technically and sonically refurbished for this edition. In cases where the desired results could not be obtained, Sony Classical has gone back to the original analogue tapes.

The two bonus DVDs are "Rubinstein Remembered", a documentary tracing the great pianist's life from his origins in ód , Poland, through his final concert there in 1975, with interviews from family and friends, newsreels, home movies, TV interviews and performance footage. Narrated by Rubinstein's son John Rubinstein and produced by Peter Rosen and the "The Benefit Recital for Israel 1976" recorded at Ambassador College, Pasadena, California on Jan 15, 1975 featuring works by Beethoven, Schumann, Debussy, Chopin and Mendelssohn.

The "Arthur Rubinstein Complete Album Collection" consists almost entirely of reproductions of vinyl LPs in their original sleeves. The few exceptions that were only released on CD retain their original CD cover. Thus for the first time ever, music lovers have the opportunity of discovering every single one of Rubinstein's original albums in a single issue.