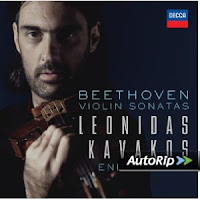 A young artist of rare quality, Leonidas Kavakos won the Sibelius Violin Competition in 1985, when still in his teens and, three years later, the Paganini Competition.

Often described as the violinists violinist, Der Tagesspiegel wrote that Kavakos has quite possibly the most beautiful violin tone imaginable.

He has appeared with conductors including Riccardo Chailly, Valery Gergiev and Ivan Fischer, and with the worlds major orchestras, including the Berliner Philharmoniker, Gewandhausorchester, London Symphony Orchestra, New York Philharmonic and Royal Concertgebouw Orchestra.

A committed chamber musician and recitalist, he is a favored artist at the Edinburgh, Montreux, Salzburg and Verbier festivals.

Leonidas Kavakos will perform the Beethoven sonata cycle in venues across Europe in 2013.
Posted by bayreuth at 10:51 PM