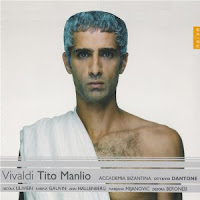 Most of Vivaldi's operas were composed for Venice, but between 1718 and 1720, he was in the employ the Austrian governor of Mantua, and he composed Tito Manlio for the governor's wedding celebration. The wedding never took place, but the opera was performed in 1719. The Mantuan court was very wealthy, and this is clear from the lavish scoring of Manlio: in addition to the usual strings, Vivaldi uses horns, trumpets, oboes, bassoon, two different registers of flutes, timpani and viola d'amore. The plot is concerned with Tito, the leader of the Romans, and his battles with the Latins, led by Gemino, whose sister, Servilia, was engaged to Manlio, Tito's son. Gemino was engaged to Tito's daughter, Vitellia. Manlio goes on a reconnaissance mission to the Latins and kills Gemino despite his father's instructions not to do so; Tito therefore sentences Manlio to death. Interwoven loves and angers make for emotion-laden arias, many with superb obbligato instruments. Bass Nicola Ulivieri is a powerful Tito, and soprano Karina Gauvin sings with great heart as his son, Manlio, while mezzo Maijana Mijanovic's Vitellia offers a full-range of feelings and superb singing, both plaintive and vengeful. The rest of the cast is fine, and Ottavio Dantone leads a crisp, dramatic performance. There are acres of good music here. Highly recommended, and a feast for Vivaldi fans. --Robert Levine
Posted by bayreuth at 9:21 PM