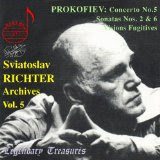 This all-Prokofiev disc, the fifth in Doremi's Sviatoslav Richter Archives series, competes very well against some of the pianist's other performances. The Sixth Sonata, from a 1963 Richter recital in Budapest, is almost as trenchant as the one the pianist gave three years earlier in Carnegie Hall. And the recorded sound is much superior to that of the Columbia (now Sony) LP, in which that Carnegie performance was issued, and also slightly superior to that of other Richter "pirates" of the Sixth. The Second Sonata comes from Richter's unforgettable Prokofiev-Scriabin-Ravel recital in Carnegie on April 19, 1965. The recorded sound is inferior to Praga's issue of the same sonata in a performance the following year. But Richter was working at a hyper-fevered pitch in Carnegie that evening, and no other pianist (including Richter himself) has ever made the piece's brilliance so compelling--the rapid crossing of hands in the scherzo has to be heard to be believed--or its lyricism so affecting. Doremi's version of the Piano Concerto No. 5 (a 1964 broadcast with Svetlanov conducting the Moscow Philharmonic) is less wonderful than, and much inferior in sound to, the pianist's 1959 studio version on DG. --Stephen Wigler
Posted by bayreuth at 3:49 AM