Haydn Mass No.10,12 by Marriner and Staatskapelle Dresden EMI 1CD 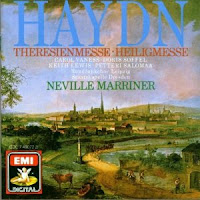 He was the "Father" of what we know as the modern symphony, having mastered that form on 104 occasions. He also pioneered the string quartet, setting the table for not only his much younger contemporary Mozart, but also for later titans like Beethoven and Schubert. But the great Franz Joseph Haydn was also known for being an extremely skilled composer of sacred and choral music, especially during the last few years of his composing time at the turn of the 19th century. Of particular note are the final six settings he made of the Latin Mass, each of which not only show his mastery of choral writing, but also of contrapuntal technique utilized by forebears like Bach and Handel. Two of those settings are featured on this mid-1980s EMI recording.

Haydn's 10th Mass is known as the "Heiligmesse" in German-speaking circles because of Haydn cleverly concealing in some of the sections of the Sanctus movement an old chorale "Heilig Heilig Heilig" ("Heilig" being the German word for "Sanctus"); while No. 12 is known as the "Theresienmesse", supposedly in honor of Marie Therese, the wife of the Emperor Francis II (though there is some scholarly doubt about that aspect). Both masses require a sizeable choral and vocal component, but a surprisingly restrained amount of orchestral forces--primarily trumpets, timpani, organ, and strings (plus a pair of clarinets in No. 12), and both are in the imposing key of B Flat Major, a key that Haydn used quite dramatically for a number of his Mass settings.

Both works feature the solo vocal talents of Carol Vaness, Doris Soffel, Keith Lewis, and Petteri Salomaa, along with the fine choral thrust provided by the Leipzig Radio Choir, and with Sir Neville Marriner doing the conducting honors with the Dresden State Orchestra. The results are nothing less than some of the best recordings of choral music made in that era, the mid-1980s, and of the kind of music that people really only have gotten to know in relation to Haydn since the 1970s. And while they may seem somewhat quaint in comparison to the epic choral firestorms of heavyweights like Berlioz, Verdi, and Bruckner, these Haydn masses nevertheless retain their power to engage the listener, especially given the caliber of talent and the recording quality on display here. For any fanatics of religious and/or choral music, this Haydn recording is the ticket.
Posted by bayreuth at 8:58 PM