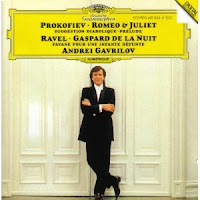 Why certain CDs are made unavailable to the marketplace remains a mystery. This breathtakingly performed and recorded DGG CD is a case in point. Recorded in 1992 in Wiesbaden by Andrei Gavrilov, the works included are a perfect reading of the Prokofiev piano transcription of his 'Romeo and Juliet' ballet, a rarely heard early work for piano 'Suggestion diabolique' opus 4 No. 4, and his Prelude opus 12 No. 7.

Gavrilov understands the drama of Prokofiev's works and his facile technique proves he can manage the swift passages with such ease that they make the dreamy sequences even more lush in comparison. In a fine accompanying essay with the recording Gavrilov states 'With this recording I wanted to show what treasures lie hidden in the synthesis of the arts, when literature, painting, drawing and theater all flow together towards a single goal: musical images of sometimes frightening power'. His playing certainly follows his thoughts!

Coupled with the Prokofiev works are two equally dramatic works by Maurice Ravel: a 'Gaspard de la nuit' that is staggeringly well played and conceived, and the beloved 'Pavane pour une Infante defunte'. Gavrilov approaches the French works with the same intuitive powers with which he performs the Russian works. The message is communication with his audience, and the impact is pianism of the highest order. Highly Recommended.
Grady Harp, March 06
Posted by bayreuth at 12:38 AM