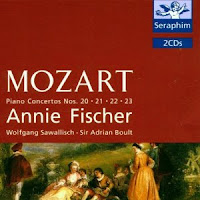 Here's a solid bundle of Mozart's most august work at a price low enough to stuff the stockings. Annie Fischer renders these four canonical Mozart concertos with unfussy polish and grace. The sound on disc one, containing the merrier Concertos Nos. 21 and 22, is somewhat poorer than on the second, but the sensuous ebullience remains. The stormy D minor concerto is interpreted without overweening pathos, while the central movement of No. 23 exhibits shattering despair. You'll want more recordings of these works of course, but (especially at its bargain price) it would hardly be excusable not to add this lovely set.
--Amazon.com
Posted by bayreuth at 5:24 AM