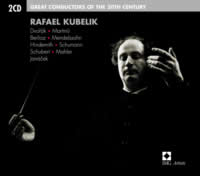 THE BIOGRAPHY - RAFAEL KUBELIK (1914-1996)
Giving no regard to the advantages (and disadvantages) of a famous name, Rafael Kubelik (1914-1996) succeeded in conquering the world with his baton, just as his celebrated father Jan had conquered the world with his violin. In January 1934, fresh from the Prague Conservatory and not yet 20, Rafael Kubelik made his debut with the Czech Philharmonic. In October 1937 he took the orchestra on tour to Britain, deputising for Václav Talich, and was hailed as 'one of the most gifted conductors of the day'. During the first years of he so-called Protectorate, Kubelik directed the Brno Opera. In 1942, following the closure of the theatre there, he took over Talich's orchestra as chief and, despite Nazi oppression, successfully maintained a high profile for Czech music. After liberation, Kubelik established the Prague Spring International Festival. Then came the Communist coup in February 1948. Finding the limitations imposed on artistic freedom unacceptable and vowing not to return until democracy had been restored, Kubelik emigrated to England, where the BBC hoped he would succeed Sir Adrian Boult. Instead, his burgeoning international career took him to Chicago. On his return to London, Kubelik was engaged for three seasons at Covent Garden (1955-58), achieving phenomenal success with Jenufa and Les Troyens. Meanwhile, he was in ever increasing demand at major festivals, especially Salzburg and Lucerne. By 1961 he was at the helm of the Bavarian Radio Symphony Orchestra, remaining with them until the mid-1980s. News of the 'Velvet Revolution' in his homeland so rejuvenated Kubelik that he came out of retirement to conduct his old orchestra in an unforgettable performance of Smetana's Má vlast for the opening concert of the 1990 Prague Spring Festival.

THE RECORDINGS
The recordings have been chosen to reflect the musical institutions and repertoire with which Kubelik was most closely associated during his career. Czech music and the Czech Philharmonic are strongly represented. Kubelik gave the Prague premiere of Martinu's Symphony No.4 in 1946, and took it on tour to Paris, Brussels, Geneva and Poland before recording it in June 1948, shortly before he emigrated to the West. This rare recording is reissued here for the fist time on CD. His musical life in England included a fruitful relationship with Walter Legge's Philharmonia Orchestra, heard here in Berlioz (a reminder of Kubelik's championship of Les Troyens, which he performed during his period at Covent Garden) and Mendelssohn. In Chicago (1950-53) he was as keen as ever to programme contemporary music and a particular favourite was Hindemith's orchestral showpiece, a superb vehicle for the virtuosity of his Chicago players. Back in Europe, Kubelik made recordings in Vienna, including this vital reading of Janácek's Sinfonietta, an essential item throughout his career, and the superbly played Schubert 3rd Symphony. Following his appointment in Munich in 1961, Kubelik recorded mainly with German orchestras. With the Berlin Philharmonic he recorded the complete symphonies of Dvorák and Schumann, and the crowning glory of his years with the Bavarian Radio Symphony Orchestra was the recording of the complete Mahler symphonies.

Email ThisBlogThis!Share to TwitterShare to FacebookShare to Pinterest
Labels: Great Conductors of the 20th Century, Kubelik