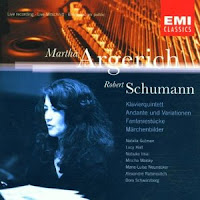 This Schumann program, recorded live, features two quintets and two duos, including one of his most popular works, the Piano Quintet, and one of his most obscure, the Andante and Variations for two pianos, two cellos, and horn. The performances here, by eight great players with towering personalities who will go to any length to bring out and underline character, contrast, and expression, are technically stunning, tonally gorgeous, and emotionally voluptuous. This is Schumann played with rapturous romantic ardor and great freedom rather than poetic tenderness, inwardness, and restraint. The fast movements are wild and tempestuous, the slow ones languidly dreamy; dynamics range from whispers to explosions; rhythmic liberties and tempo changes are extreme. However, there is no doubt that all these excesses represent a genuine response to the music, not a striving for cheap external effect. Martha Argerich, who participates in every piece, puts her inimitable stamp on all of them, but always as an equal partner. Only in the Variations with their predominant piano parts (Schumann actually recast them for two pianos) does she seize and enjoy the opportunity for soloistic abandon. The cello version of the Fantasy Pieces with Natalia Gutman and the Fairy Tale Pictures with Nabuko Imai are extremely free, with lots of lingering, speeding up, and slowing down, but the playing evokes a fantastic, spooky fairyland atmosphere, going from hesitant and wistful to jaunty and exuberant. The lovely final Fairy Tale is both a lullaby and a valediction, its hauntingly beautiful melody drifting away into sleep and dreams. --Edith Eisler