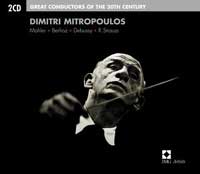 THE BIOGRAPHY - Dimitri Mitropoulos (1896-1960)
Born in Athens in 1896, Dimitri Mitropoulos may well have become a priest, but instead became first a composer and gifted pianist and then a conductor with an extraordinary musical memory. Busoni, his teacher in Berlin, advised Mitropoulos to abandon composition and concentrate on being an interpreter. From 1921 to 1924, he worked under Erich Kleiber as a répétiteur at the Berlin Staatsoper. On his return to Athens he taught at the conservatory and conducted its orchestra (1924-29). In 1930, he was invited by the Berlin Philharmonic and created a sensation by playing and conducting from the keyboard Prokofiev’s Piano Concerto No.3, a feat he later repeated in Paris, London and the USSR. In 1937, having made a guest appearance with the Boston Symphony Orchestra the previous year, he was appointed musical director of the Minneapolis Symphony Orchestra (1937-49). Subsequently, he moved to the New York Philharmonic, first as joint chief conductor with Stokowski and then, one year later, as the orchestra’s sole music director (1949-1958). From 1954 until his death, he conducted in every season of the New York Metropolitan Opera. He died in Milan in 1960 while rehearsing Mahler’s Symphony No.3 with the La Scala Orchestra.

THE RECORDINGS
Mitropoulos is under-represented in the current catalogue. This compilation features commercial recordings not previously available on CD and a rare live studio broadcast of Mahler’s Symphony No.6 from Cologne. Mitropoulos was a renowned interpreter of Mahler (he made the premiere recording of the First Symphony) and for its first official release this celebrated recording of the Sixth Symphony has been superbly remastered from the original WDR tapes. The orchestral extracts from Berlioz’s Roméo et Juliette, in a recording that has not been available for at least 40 years, show Mitropoulos at his best: passionate, exciting and intense. The same qualities inform the Dance of the Seven Veils from Salome, which represents Mitropoulos’s close affinity with the music of Richard Strauss. Debussy’s La Mer was a favourite work of the conductor, though this version from 1950 is his only studio recording of the work.

Email ThisBlogThis!Share to TwitterShare to FacebookShare to Pinterest
Labels: Great Conductors of the 20th Century, Mitropoulos