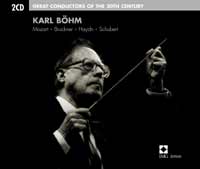 Karl Böhm was born in Graz, and studied both law and music. Though he had no formal training as a conductor, he made his debut in 1917 at the Graz Opera. He became assistant to Bruno Walter at the Munich State Opera and stayed there from 1921 to 1927, when he moved to Darmstadt as music director and then in 1931 to a similar post in Hamburg. In 1933, he made his debut with the Vienna Philharmonic and at the State Opera in Dresden, where he took over from Fritz Busch in 1934. In 1943 he was appointed music director of the Vienna State Opera. After the war, he slowly rebuilt his career and in 1954 resumed his position at the State Opera but resigned in 1956. From 1957 he conducted regularly at the Metropolitan Opera in New York and in 1962 he began a distinguished association with the Bayreuth Festival. For the rest of his life he guest-conducted the major European orchestras, especially the Vienna Philharmonic. In 1970 he was named General Music Director of Austria.

Karl Böhm was mainly associated with the Viennese masters. Four of them – Mozart, Bruckner, Haydn and Schubert – are represented in this collection of stereo recordings featuring orchestras with which the conductor had strong connections: the Vienna Philharmonic, the Dresden Staatskapelle, of which he was music director from 1934 to 1943, and the Cologne Radio Symphony Orchestra, which he conducted regularly from 1947. There are two live performances: Bruckner’s Eighth Symphony recorded in Cologne in 1974 and the celebrated 1979 recording of Schubert’s Symphony No. 9 with the Staatskapelle Dresden, which makes a welcome reappearance in a new remastering. The Haydn Symphony No.91, recorded in Vienna in 1973, is rare on record and has only appeared on CD in Japan. The Overture to Così fan tutte comes from Böhm’s celebrated recording of the complete opera, made in London in 1962 with the Philharmonia Orchestra.

Email ThisBlogThis!Share to TwitterShare to FacebookShare to Pinterest
Labels: Bohm, Great Conductors of the 20th Century