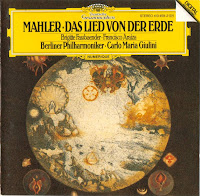 Review from amazon
Finely graded textures are one of the hallmarks of Giulini's Das Lied von der Erde, his first recording with the Berlin Philharmonic Orchestra. The maestro draws marvellous playing from the Berliners, and on compact disc the recording is equally lucid.
Intensity is in abundance in the final Abschied. Brigitte Fassbaender is a highly persuasive soloist here, cool-toned yet phrasing with intelligence and demonstrating an acute sense of what she is actually singing about, while Giulini treats the orchestral interpolations as miniature tone-poems, etched in vivid detail without any necessity for superficial rhetoric. The earlier contralto songs go almost equally well.

Perhaps there has never been an entirely successful version of the tenor songs since Fritz Wunderlich recorded them for Klemperer; the reconciling of the vocal demands of a Heldentenor with something much nearer lieder singing is hard to achieve. The Mexican tenor Francisco Araiza copes well, however. Connoisseurs of Das Lied will need to hear this recording: in this of all Mahler scores duplications are almost essential.