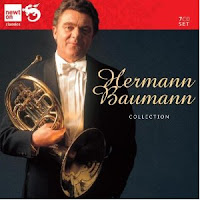 Hermann Baumann is one of the world's greatest horn players. He won the ARD International Music Competition in Munich 1964 (Jessye Norman was 2nd that year, and
won in 1965), and from then on he played in some of the greatest orchestras, conductors and
ensembles in the world. Claudio Abbado asked him during rehearsals in Rome for Mahler 6 'why aren't you in Berlin?' He played with Concerto Amsterdam under Jaap Schroder, for
Karl Munchinger and the Stuttgart Chamber Orchestra, and for Nikolaus Harnoncourt and Concentus Musicus Wien. A lifetime of concert giving around the world and an extensive
discography has ensured that his stupendous technique and versatility, and characterful playing has been heard and admired by thousands of music lovers. This extensive survey of his art embraces the major concertos and some rarities, some fascinating chamber works, and a selection of virtuoso showpieces that display the artistry of this multi-faceted musician.

All contents released previously by PHILIPS 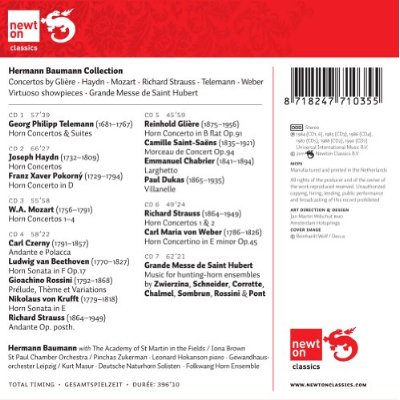