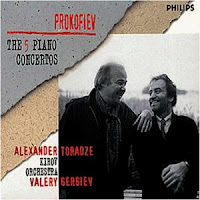 In a century that seemed to turn it's back on the aspirations of 19th century composers, some musicians kept the Romantic tradition of the composer/virtuoso alive well into the 20th century. Perhaps the most important and forward thinking 20th century virtuoso pianist and composer was Serge Prokofiev. Unlike his fellow Russian, Rachmaninov, Prokofiev created a significant body of virtuoso pieces to the piano literature, which also reflected his modernist sensibilities. Among the strongest of these works are the five piano concertos.
Most of these pieces were written for the composer, a brilliant pianist in his own right, to play himself. They span his entire career, from the audacious first Piano Concerto, written as a graduation exercise when the composer was 21. It is a brilliant student work and shows the outlines of what would become the composer's mature style. Written in one movement, it is at once full of romantic effusiveness and modernist bite. The next concerto in chronological order is ironically the Third concerto, completed in 1921. This is certainly one of Prokofiev's best-known works. Written in the key of C, this concerto is a modernist tour de force. Prokofiev balances a classical sense of architecture with a wicked indulgence in dissonance for it's own sake. The result is a work that is by turns lyrical, brilliant, and endlessly inventive.
The 2nd Piano Concerto was written just before World War I, but it was a failure at its initial performance and the score was lost in the war years. In 1923, Prokofiev reconstructed the score from memory. It is impossible to know how close the score we know have was to the original, but stylistically the Second sounds much closer to the sound world of the 3rd concerto than it does to other works Prokofiev was writing back in 1913. This work is less well known than the 3rd concerto, and yet it is perhaps a superior piece. The virtuoso writing is stunning in all the movements, particularly in the cadenzas. These soloist showpieces also significantly develop the material of the movements, making them more than mere display moments, but rather part of the actual meat of the piece. The harmonic writing in the work is audacious, mixing tonal passages with moments of spiky dissonance that keeps the work fresh and interesting at every turn. And, unlike the 3rd Concerto, this work has a dark quality that makes the music feel more personal than some of Prokofiev's other works.
The Fourth Piano Concerto is one of a body of celebrated works written for the one-armed pianist Paul Wittgenstein, a body of literature that includes concerti by Ravel, Britten and Korngold. The Prokofiev work is surprisingly lyrical. Written in 1931, as Prokofiev was contemplating his fateful return to the Soviet Union, the work illustrates the change in the composer's style at this point. Some of the most outlandish modernist gestures are gone, and in their place is a newfound feeling for melody, and harmony that, while still retaining the composer's trademark slipperiness, is mostly triadic, an outgrowth of 19th century harmony. Prokofiev's handling of the one handed texture is remarkable and, if you didn't read the program notes, it's doubtful that you'd realize that this is a left-handed concerto. The final work, the 5th Piano concerto was written a year later, and continues the stylistic change to the more conservative Prokofiev of the later Soviet years. This work is lighter on the surface, and to my ears, makes the least impression of the five. Still, it is a well crafted work, though one that I don't return to as often as the others.
I have heard several of these works in other performances, most notably the 2nd concerto performed by Horatio Guttierez and the 3rd performed by Ashkenazy, but I must say that Toradze beats them all. Prokofiev playing requires a pianist who is not afraid to revel in the surface splash of a work, and yet who also is willing to dig deeper into the works to find the deeper emotions that often elude performers of this music. Toradze is a natural for this. This pianist seems made for these works. His touch is brilliant in the showpieces, and achingly lyrical when the music calls for it. The Kirov Orchestra, under controversial conductor Valery Gergiev, sounds marvelous. Gergiev has some baggage as a conductor, a tendency to be pretentious, and some rather bizarre gestures which often get in the way of the basic ensemble of his orchestra, yet on this disc the orchestral playing is superb. And the Phillips sonic quality is simply delicious. This disc stands above any other individual versions of these works that I've heard. Any serious collector of 20th century music should have these works in their collection.
Posted by bayreuth at 10:28 PM