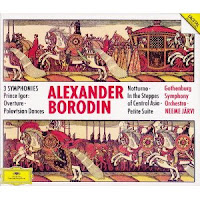 We have long needed a first-rate set of the Borodin symphonies and it would be churlish to deny that Jarvi gives us just that. The cycle ought to fit on to one well-filled CD, but DG's makeweights are more generous than their rival's and this two-disc package should not be regarded as uncompetitive even at premium price.

To take the couplings first: while The steppes have doubtless been traversed with greater sensitivity on occasion, there is ample eloquence from the Swedish winds and the overall effect is enhanced by the excellent recording. This, and part of the Prince Igor selection, appeared previously in harness to the ubiquitous 1812! As IM noted then, the Polovtsian revelries include a brief contribution from the great Khan himself, effectively recalling the music's authentic, operatic context. The Petite Suite is something of a rarity, a little stolid in Glazunov's arrangement, though that may have something to do with the rather over-beefy sound. I haven't heard Cherkassov's rival account, very much the junior partner for Mussorgsky's reconstructed Sorochintsy Fair (Olympia (CD) OCD114, 12/88). The real novelty in Jarvi's box is Nikolay Tcherepnin's exotic treatment of the familiar Nocturne. DG provide generally excellent notes—a ''documentary chronicle'' rather than the usual critical essay—from Richard Taruskin; yet there's nothing at all on the radically transmogrified quartet movement. Tcherepnin was one of Prokofiev's favourite teachers—the only one actively sympathetic to Scriabin—and his arrangement transforms Borodin's chaste textures into an oriental tableau of glitter and excess. It will come as a shock to those expecting Sir Malcolm Sargent's discreet infilling, but Jarvi is in his element. The Gothenburg first horn does not seem too happy with his part but the playing is otherwise distinguished.

The 'authenticity' of Borodin's own scores has often been questioned, the First Symphony being regarded as something of a dry-run for the Second. This is to underestimate a remarkably accomplished composition, assembled under Balakirev's wing and yet unmistakably Borodin's own work. The First Symphonies of Rachmaninov and Sibelius are perhaps the more remarkable but neither would have been quite the same without this exuberant precursor. The old Record Guide even finds the theme of Elgar's Enigma anticipated 'anagramatically' in the material of Borodin's Andante. Jarvi plays the music for all it's worth and DG's big, bassy, resonant sound works well. (BIS more consistently achieve transparency in this acoustic space.) Perhaps the Schumannesque finale is fractionally rushed, although Andrew Davis is similarly fleet of foot with the Toronto SO (CBS). In the Third Symphony and Prince Igor Overture, Jarvi's familiar tendency to hustle the music along is more pronounced. If you see the Moderato assai marking of the first movement of No. 3 as incompatible with anything but the usual poised pastorale, Jarvi's dramatic, interventionist approach may not be for you. The scherzo is also tougher than usual, though by no means unconvincingly so. And I should say that the indisputably lyrical elements of the Overture are most beautifully shaped, the rubato natural and unforced.

Should you feel that Jarvi fails to build tension as effectively as his more patient rivals here or in No. 3, you will appreciate his way with No. 2—an epic reading different in tone from Davis's lithe and astringent one. The opening pages are superbly crisp—how listless Gergiev sounds by comparison (Philips)—and only the crescendo at the end of the movement (7'43''ff) seems a little too good to be true. Either Jarvi's control of the orchestra is truly awesome or the engineers have contrived a little help. The conductor adopts a sensible tempo to articulate the bubbling scherzo, and his Andante is daringly broad. (The tempo indications and metronome marks here are in any case Rimsky's.) The evocative horn solo is eloquent indeed—it must have been a nightmare to play—and, if some of the phrasing later on seems a shade under-motivated at Jarvi's leisurely pace, the fervour of the strings at the climax should convince you—they certainly convinced me. The finale is superbly done.

With Andrew Davis's engaging Toronto set, lightly sprung and tightly miked, now showing its age, and the one-disc cycles from Serebrier (ASV) and Gunzenhauser (Naxos) let down by the quality of the orchestral response, Jarvi's discs, comprehensively indexed and attractively boxed, would now be my first choice.