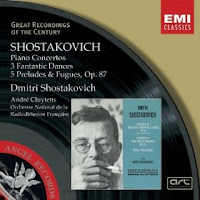 It's always a joy to hear a composer's own interpretation of his music. In the case of the great Soviet composer Dmitri Shostakovich, getting to hear him play his own piano concertos as well as several Preludes and Fugues is nothing short of breathtaking.
While the recordings on this disc (dating from 1958) are in Mono, they sound fantastic and the remastering is stunning. In fact, it is such a clear recording, you would almost think it was stereo.
Shostakovich's piano playing is jaw-dropping throughout this disc especially on the two concertos. You can hear the seriousness and the contrasting humor in both of these works as well as serene romanticism.
The "Three Fantastic Dances" and the five "Preludes and Fugues" which follow show off Shostakovich's superb solo piano technique and are definitive authentic performances of these works. It's a shame that although Shostakovich performed all 24 Preludes and Fugues himself in concert, he never recorded all 24. It would've been awesome had he done so.
Definitely, this CD is a must for anyone's Shostakovich collection. It's a rare opportunity to hear Shostakovich as a performer and in excellent quality sound. This is truly an historic album and with the 100th anniversary of his birth still being celebrated even after the passing of 2006, I cannot think of a better way to celebrate than with this CD.
Posted by bayreuth at 2:39 AM

Email ThisBlogThis!Share to TwitterShare to FacebookShare to Pinterest
Labels: Shostakovich