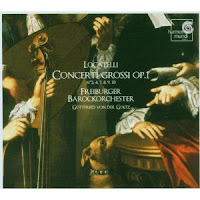 There is absolutely nothing here to criticize. The Freiburg Baroque Orchestra is one of the premier ensembles of its type, and it performs this music on top form. Locatelli's Op. 1 is nicely varied as to content, particularly in this selection. Only one concerto (No. 7) follows Vivaldi's three-movement "Venetian" form; the remainder are modeled on Corelli's concerti grossi and have four or five movements apiece. Locatelli's "sarabandas" are particularly lovely, and they are enhanced by the characterfully varied treatment of the continuo throughout these performances. Concerto No. 8 is a "pastoral", as in Corelli's famous Christmas Concerto, while four of the six works featured here employ minor keys, which only heightens the music's expressive intensity. In short, you won't find a better-chosen, more appealing selection of high Baroque concertos anywhere, and the engineering is typically splendid. For fans of the period, this is self-recommending. --David Hurwitz, ClassicsToday.com


LOCATELLI Concerti grossi, op. 1: No. 2 in c; No. 4 in e; No. 7 in F; No. 8 in f; No. 9 in D; No. 11 in c • Gottfried von der Goltz (vn), dir; Freiburg Baroque O (period instruments) • HARMONIA MUNDI 901889 (61:03)
My last encounter with the Freiburg Baroque Orchestra was somewhat less than engaging, a DVD in which this Rolls Royce of period-instrument orchestras smoothly motored its way through the Brandenburg Concertos with expressionless faces and what I described as “mind-numbing seriousness” (Fanfare 30:1). For this new recording, Harmonia Mundi has a picture on the front of the booklet that reveals that (nearly all) the orchestra are in fact capable of smiling.
And well they might smile, for this outstanding recording of half the concertos that go to make up Locatelli’s opus 1 is in a different league, with magnificent playing allied to a spontaneity and apparent joy in making music that was near totally absent in the Bach. Locatelli’s first publication appeared in Amsterdam, where he would later settle, in 1721. As has often been noted, in format this set of concerti grossi harks back to Corelli’s op. 6, consisting as it does of eight da chiesa and four da camera concertos. But the Corelli connection has often been overstressed; there is no evidence that Locatelli was a pupil of Corelli during his years in Rome (1711 to about 1723) and it has to be remembered that while the latter’s op. 6 was published in 1713, the concertos included were composed many years before, probably around 1685. The very clear stylistic differences between the two sets should therefore occasion no surprise. Equally misguided are attempts to link Locatelli’s op. 1 with the virtuosic writing so strongly associated with the composer’s later music. There is little capacity within the concerto grosso framework, with its alternation between the solo concertino group and the ripieno strings, for such writing. Among the concertos on the present disc it will be heard—and then only on a modest level—in just one movement, the final fugal Allegro of Concerto No. 4, with its busy solo violin figuration. Harmonia Mundi’s back-cover blurb “A Baroque Paganani!” is therefore silly in the context.
One of the major differences between Corelli’s concertos and those of Locatelli is the expansion of the concertino solo group from three (two violins and cello) to four by the addition of a viola, a format shortly to be followed by Geminiani. In two of the concertos on the present disc (Nos. 7 and 8), he goes still further by adding a second viola to the concertino. The result is a richness of texture unknown in Corelli, here enhanced by the superb depth and sonority of the Freiburg orchestra’s playing. Elsewhere, too, comparisons with the older master are revealed as superfluous, as in the opening Largo of Concerto No. 11, where the long cantilena in the solo first violin part, exquisitely shaped by von der Goltz, is sustained far beyond the limits of anything that would have been heard in the 17th century.
Also apparent is Locatelli’s clear determination to contrast the da camera sonatas stylistically by investing them with a more modern, less contrapuntally dense character than the da chiesa works. No 7, for example, not only adopts three-movement form, but has a driving opening Allegro with sturdy fanfare calls in the bass that is obviously indebted to Vivaldi, as is the central Largo, with its lightly inflected chords and imitation between treble and bass. No. 9, the other da camera concerto, opens with an Allegro that in its clear-cut phrasing looks forward to the galant style. In the da chiesa concertos, one notes not only Locatelli’s mastery of counterpoint, but also his ability to spin elegant melodic lines—the Largo that lies at the heart of No. 2 being an especially memorable example—and the harmonic shifts that constantly provide moments of added interest to this splendid set of concertos.
As made clear already, the performances are exceptional, so much so that they inspire not only the obvious hope that the Freiburgers will complete the set, but also a strong desire to hear them in an extensive range of the concerto grosso repertoire. The only complete set that appears to be currently available is that by the Raglan Baroque Players on Hyperion, an issue given a somewhat ambivalent recommendation by Robert Maxham in 19:3. Harmonia Mundi’s sound is as richly detailed as the performances, but someone should have spotted that the details on the cover of both pack and booklet should read Concerto 11, not 10.
FANFARE: Brian Robins
Posted by bayreuth at 11:52 PM

Email ThisBlogThis!Share to TwitterShare to FacebookShare to Pinterest
Labels: Locatelli