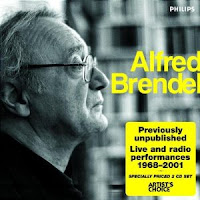 Personally selected by Alfred Brendel, these hitherto unreleased recordings span approximately three decades of his career as a concert and recording artist. With the sole exception of the very first piece on Disk Two, which was recorded at the BBC's London studios, all of these recordings were made in the period from the late 1980s to early 2000 in concert halls, primarily London's Royal Festival Hall, from live concert performances. The sound quality is quite fine, even for the early vintage analogue stereo recording from the late 1960s, due to the excellent work of several teams of BBC sound engineers. However, virtually every piece ends with an extended round of an applause which I find rather excessive, especially when the applause lasts nearly thirty seconds.

Without question, this is a compelling two CD disk set which will greatly interest long-time fans, other admirers, and those who are simply curious about Brendel's superb artistry at the keyboard. The first disk is devoted to a compelling, often quite, exciting, interpretation of Beethoven's Diabelli Variations in a performance that should be remembered for offering both ample instances of elegant, often pensive, and lyrical playing. Brendel is convinced that this may be his best recording of the variations ever committed to disk, and it is a memorable performance that ought to hold its own against those from peers like Pollini. The second disk is both a chronological and muscial odyssey, opening with an old studio recording of Chopin pieces, followed by an obscure Mendelssohn work and two vivid, all too brief, Busoni pieces. At the very end of the second disk is one of the best performances I have heard of Beethoven's 28th Piano Sonata, which, again, Brendel believes is superior to his most recent Philips studio recording.

Email ThisBlogThis!Share to TwitterShare to FacebookShare to Pinterest
Labels: Brendel