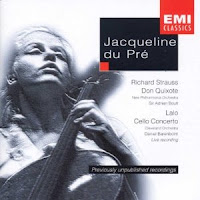 The notes tell the story of how this air-check of a rehearsal came about. Du Pre was scheduled to play Don Quixote udner Klemperer, who became ill. Boult stepped in, and as the rehearsal began, an engineer thought to turn on the tape recorder in the contorl booth. As it happens, Du Pre never made a commerical recording of the work, and in the CD era this unreleased performance finally saw the light of day.

So far as the orchestral part goes, Boult leads a generally brisk reading with lots of colorful inner detail, caught beautifully by the microphones--you won't detect in any way that this is not a real performance. And Du Pre herself plays with total commitment, apparently the only way she knew how. She is close to the mike, so her intensely expressive tone is captured well.

She has a more soulful, rhapsodic view of the music than Boult, but he adapts immediately. For her ability to convey emotion and in this case to tell a stroy, Du Pre has no equal. Every bar says something new about the fantastic Don and his moody adventures. Not every bar is perfectly in tune, but I didn't care. This is a Don Quixote to dream along with and wipe away a tear over. For sheer spontaneity, it's one of a kind.

P.S.--Although out of print as a single CD, this performance is included in a box set of Du Pre playing conertos.