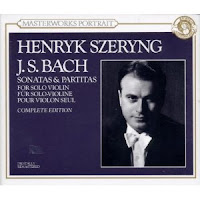 I have only been listening to nine different recordings of these works, so I am in fact a complete novice in the field (and no musicologist at all), all the same I will try to give short comments on these nine interpretations that just might help you to choose which set you want to buy.

My personal favourite is no doubt John Holloway's recording (on ECM). When I first heard it I had only been listening to Shlomo Mintz (on DG) and Hilary Hahn (on Sony), so I feared the great Ciaccona/Chaconne of BWV 1004, because both of those artists' interpretations of that movement sounded like musical warfare, full of shrieks and noises. But Hallelujah! Guess what happened? The movement made sense to me for the first time - in Holloway's hands it is actually music! And the rest of the set also sparkles in Holloway's recording. What is so special about Holloway's version is that it has an almost spiritual, metaphysical aspect to it that nobody else achieves. It is a recording full of sublime transcendental beauty. That aspect of course is emphasized by the wonderful church acoustics (another great Manfred Eicher production from ECM). The booklet contains a performer's note and a few facsimile pages of Bach's beautiful handwritten score. If you are looking for just one recording, you don't really have to read further - I recommend that you buy Holloway's set.

If you have not bought Holloway's set yet, I have to say a little more about Mintz and Hahn: The aggressive approach in Mintz' Ciaccona/Chaconne is more or less present throughout Mintz' recording and in my opinion his playing does not quite justify it - it is "agitated" without having a reason to be so. If you want the sort of expressive power which Mintz is trying to put into these works Nathan Milstein (on DG) is a better option (NB: There is an earlier recording from EMI which I am not reviewing here). The problem with Hahn is that you are more impressed than moved; she plays fast - some might even say that she is superficial and skates over the essentials. Hahn also has a tendency to romanticize in the slow movements. Besides it is not a complete recording, she only plays half the works (BWV 1004, 1005 and 1006). However, her version of BWV 1006 is probably my favourite because of its exquisite, exuberant brilliance that fits that partita well.

Sigiswald Kuijken (on DHM) is almost as good as Holloway and he almost reaches Holloway's metaphysical heights, but his Ciaccona/Chaconne is not entirely perfect, it sounds like separate movements put together rather than as a whole. The performance has rougher edges than Holloway's, which can be a good thing. (NB: I am reviewing the 2001 release from DHM not the earlier release on the same label.)

Viktoria Mullova (on Onyx) and Rachel Podger (on Channel) are more down to earth than Holloway, but they both play beautifully. Maybe Podger is a somewhat overrated performer of Bach's music for solo violin. Her recording has been praised by numerous critics and it is so beautiful that I would like to like it more, but isn't it just a little bit boring? I am listening to it right now and again I get this sort of feeling: "Yes, it is beautiful, but why am I listening to it?" That question answers itself when I listen to Holloway or Kuijken. With Kuijken and Holloway playing the music explains itself, it says: "I will just explain how this sounds." If you are looking for clarity and serenity choose Mullova. Make sure you buy the new Onyx set not the old Philips release!

If you want the slow movements played slow and the rest played beautifully by a young talented violinist Julia Fischer (on Pentatone) should be your choice.

Henryk Szeryng's first recording (on Sony) from 1955 is very serious and intense, a haunting (but also demanding) experience. Szeryng later made another recording for DG but I have not heard it (yet). Of course you should expect less than perfect sound on a recording that is more than fifty years old.