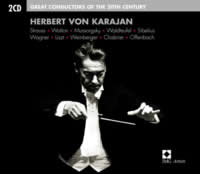 THE BIOGRAPHY - HERBERT von KARAJAN (1886-1954)
Born in 1908 into an aristocratic Austrian dynasty of musically gifted doctors and academics, Herbert von Karajan had breeding and an embarrassment of talent. In his native Salzburg, in Ulm and Aachen in the 1930s, this was supplemented by an apprenticeship in the art of conducting with exemplary role models, as rigorous, wide-ranging and replete as any aspiring Kapellmeister could wish for. However, the times were out of joint: after the war he would be obliged to rebuild his career afresh. In 1948 he began a close collaboration with Walter Legge's newly formed Philharmonia Orchestra, a highly fruitful relationship that lasted for the better part of a decade. From 1957 to 1964 he served as artistic director of the Vienna State Opera and worked closely with La Scala, Milan. However, the most important collaboration of Karajan's career - indeed one of the great musical partnerships of the 20th century - was with the Berlin Philharmonic; a partnership that began in 1955, when he succeeded Furtwängler as music director, and ended shortly before Karajan's death in 1989.

THE RECORDINGS
The live Italian Radio recording of Walton's First Symphony is the most exciting addition to Karajan's discography since the conductor's death in 1989. Taken from acetates supplied by RAI, the performance reveals the affinity Karajan felt for the music of Walton, whose Belshazzar's Feast he had conducted in Vienna in 1947: 'the best choral music that's been written in the last 50 years'. The later recordings come from Karajan's hugely successful period with Walter Legge's Philharmonia Orchestra and include a number of fine recordings which, after a number of years, are being revived here (in new remasterings) and which demonstrate the special relationship Karajan developed with the orchestra. The composer himself greatly admired this 1953 recording of Sibelius's Fourth Symphony, and the Mussorgsky/Ravel Pictures at an Exhibition is both thrillingly played and spectacularly recorded. The most recent recording featured in this compilation is of Karajan and his Berlin Philharmonic Orchestra in the Liebestod from the 1971 complete recording of Wagner's Tristan und Isolde. Like Beecham, Karajan had a great fondness for high quality 'light' music and a number of fine examples have been included in this set.

Email ThisBlogThis!Share to TwitterShare to FacebookShare to Pinterest
Labels: Great Conductors of the 20th Century, Karajan