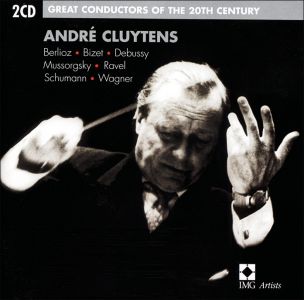 THE BIOGRAPHY - ANDRÉ CLUYTENS (1905-1967) Best known for his interpretations of French music and his cycle of Beethoven symphonies with the Berlin Philharmonic, André Cluytens was a native of Antwerp, where his father was conductor of the Théâtre Royal. In 1927, he succeeded him, making his début with Bizet's Pêcheurs de perles. In 1932 he conducted at the Toulouse Opera and from 1935 at Lyon and Bordeaux, becoming a French national. After the war he was appointed to the Opéra-Comique in Paris (1947-53) and in 1949 succeeded Charles Munch as conductor of the Paris Conservatoire Orchestra. He was the first French conductor to appear at Bayreuth, and, after Munch, the most respected French conductor of his day, recording with such artists as Solomon, Gilels, Oistrakh and Shostakovich.

THE RECORDINGS
This compilation features a representative selection of Cluytens's recordings of the French, German and Russian repertoire with which he was associated throughout his life. His live performance in stereo of Berlioz's Symphonie fantastique with the Paris Conservatoire Orchestra in Tokyo in 1964, a rarity given the small amount of good broadcast material available, is a must for collectors. Bizet's Symphony in C (acclaimed on its first release in 1954) appears on CD for the first time and the stereo recording of Debussy's Images (from 1963) is also a rarity. La Valse, with the Philharmonia Orchestra in 1958, is new to the CD catalogue and predates Cluytens's complete edition of Ravel's orchestral music with the Paris Conservatoire Orchestra in the early 1960s. Schumann's Manfred Overture (from 1957) represents Cluytens's close association with the Berlin Philharmonic Orchestra, with which he recorded a famous Beethoven symphony cycle. The short Wagner excerpt (from 1959) is a reminder of the conductor's connections with the Bayreuth Festival. Cluytens performed and recorded a great deal of Russian music, but the most celebrated is his complete recording of Mussorgsky's Boris Godunov made in 1962 with Boris Chistoff in the title role.

Email ThisBlogThis!Share to TwitterShare to FacebookShare to Pinterest
Labels: Cluytens, Great Conductors of the 20th Century