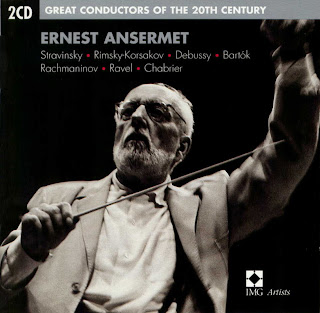 First appearances on CD of Ansermet's authoritative stereo accounts of Bartók's Concerto for Orchestra, Rachmanivov's The Isle of the Dead and Rimsky-Korsakov's Scheherazade

THE BIOGRAPHY - ERNEST ANSERMET (1883-1969)
Ernest Ansermet, born on 11 November 1883 in Vevey, Switzerland, read mathematics at Lausanne University and studied music concurrently. An invitation to conduct a student orchestra determined his career. He had lessons with Weingartner and Lacerda, met Stravinsky in 1912 and became a celebrated interpreter of his music. For eight years he was conductor of Diaghilev's Ballets Russes. In 1918 he formed the Orchestre de la Suisse Romande and was its principal conductor for 49 years, giving many premieres, including Ravel's La Valse, Stravinsky's Chant du Rossignol and Falla's The Three-Cornered Hat. His first recordings were with the Ballets Russes orchestra, in New York in 1916, his last, of Stravinsky's Firebird with the New Philharmonia Orchestra, in London in November 1968. He died in Geneva on 20 February 1969.

THE RECORDINGS
This compilation focuses on works by those composers who Ansermet knew and with whom he was closely associated throughout his life - Debussy, Ravel, Stravinsky and Bartók - and also highlights his Russian connections with music by Rimsky-Korsakov and Rachmaninov. Stravinsky's Chant du Rossignol (from 1956) and Ravel's La Valse (from 1953) were both given their premieres by Ansermet. Apart from Debussy's Prélude à l'après-midi d'un faune and Chabrier's Fête polonaise, all the recordings are new to CD. The majority of the recordings date from 1954 to 1956, a period when Ansermet and his orchestras, the Paris Conservatoire and the Suisse Romande, were at the top of their form, and are in early stereo, except for La Valse, which boasts very high quality mono sound.

Email ThisBlogThis!Share to TwitterShare to FacebookShare to Pinterest
Labels: Ansermet, Great Conductors of the 20th Century